It seems I am always in search of great Christian comedies. While I have found some, Brother White is unfortunately not one of them. Although having a few sweet moments, good production quality, and actors Jackée Harry and Reginald VelJohnson (always a bonus); it left me with the thought, “just okay…not great.”

In Brother White, an associate pastor at a megachurch in Los Angeles, James White (David A.R. White), is transferred to a small Atlanta church in an impoverished part of town. When he finds out that his new church is in debt and about to shut down, he must find a way to raise the money needed to save it. Brother White also stars Andrea Logan White (Mom’s Night Out, Do You Believe?), Anna Margaret (When The Game Stands Tall, Scream Queens), Reginald VelJohnson (Die Hard, Family Matters), Senyo Amoaku (The Expendables, Do You Believe?), and Jackée Harry (227, Sister, Sister).

Although the general idea of Brother White has a lot of potential, the film falls victim to a common problem–having so many different plot lines that none of them are fully developed. For instance, there is a scene where James White runs out in front of his new congregation and starts preaching in a “megachurch” style that is totally inappropriate for his audience. It became evident that they threw this in solely for entertainment purposes because they never showed him learning how to really preach and connect with his parishioners. I would have loved to have seen a moment where he learned to be real and truthful on the pulpit without all the glitz and glamour. There are several other moments like this throughout the movie, creating a collage of ideas, that when you step away to look at the big picture, doesn’t contain much meaning.

The other struggle of the film is a lack of believability. In comedy, I find it’s best to go one way or the other. Either you have a movie that’s clearly a spoof and not meant to be taken literally, or you have a film that is realistic and relatable. Brother White fell into awkward middle ground. Most of the characters weren’t big enough to be a spoof, but not realistic enough to be relatable. And, although I did enjoy Jackée Harry and Reginald VelJohnson, I didn’t feel truly connected to any of the characters by the time the credits rolled.

Then, of course, there is the small matter of the main character’s names. There is James White, a white pastor in an African American church, and his wife Lilly White. Yes, Lilly White. Clearly, they were trying for some type of irony. It didn’t really work. Although I do realize that that is the actual last name of the actors playing these roles, the jokes alluding to it felt forced and extremely scripted.

There are several other unrealistic moments I could reference, but I’ll end with this one: There is a scene in which James White tells his 15-year-old daughter to hang up signs in the neighborhood by herself. Alone. In a dangerous neighborhood. I can’t imagine any parent allowing their child, in this day and age, to wander the streets of a city alone. Does he not watch the news? Has he not heard of the buddy system?

On a positive note, there were a few really touching moments. I liked seeing the previous pastor’s kid, who had become a criminal, get redeemed. I also loved the musical performances. If you’re a fan of Grammy Award winner Bebe Winans, he does make a special appearance.

Overall this is a decent movie free of blasphemy and inappropriate content. However, the film leaves a lot to be desired and would not be my first choice for a movie night.

WHAT AGE GROUP IS IT FOR?

Brother White is an extremely clean film. The only moment that has some violence is that of a father shaking his child. When James White steps in to stop him, the father punches James in the face. However, those actions are not condoned. Therefore, I would give it a PG rating. This isn’t the most interesting film for children, but it’s not bad.

LOOKING TO SHOW IT AT CHURCH?

If you are a subscriber to the PureFlix streaming service, than you would have access to the PDF discussion guide that accompanies the movie. Otherwise, the main messages that can be pulled from this film are: Being happy with where you are in life, redemption, hope, following the path God guides you towards, and evangelism. However, since most of the messages weren’t fully developed, this movie wouldn’t be my first choice for a sermon illustration. 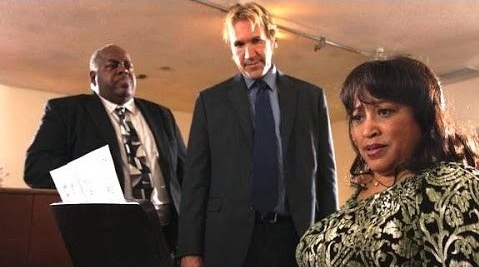