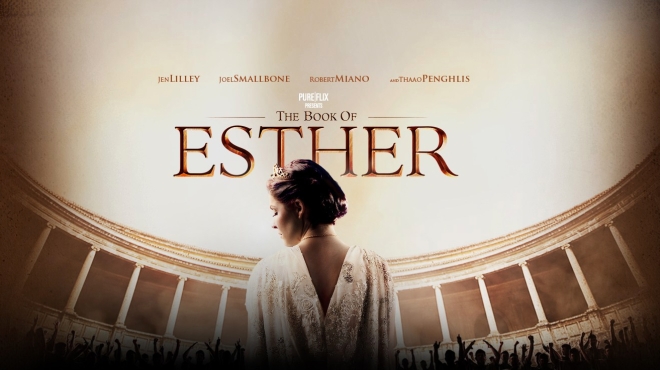 Posted on June 29, 2018 by JCinHollywood Posted in Movie Reviews

The Biblical story of Esther is one of my all-time favorites. A beautiful and brave woman, she is the epitome of a true heroine. It is her compelling story that the film The Book of Esther is based on. Unfortunately, while the film does a relatively good job in its interpretation of the texts, actress Jen Lilley, who plays Esther, gives a performance lacking in authenticity. Throw in a B-movie production quality with sub-par directing, and you’re left with a film that is just simply adequate.

The Book of Esther begins with Esther as a young girl and then follows her in her adulthood as she is selected to marry King Xerxes and become the Queen of Persia. When she learns that the wicked grand vizier, Haman, has convinced the king to kill all of the Jewish people, she must risk her life to change his mind and spare her people. The Book of Esther stars Jen Lilley (Days of our Lives, General Hospital), Robert Miano (Fast & Furious, Donnie Brasco), Thaao Penghlis (Days of Our Lives, Mission: Impossible), and Joel Smallbone (Priceless, Like a Country Song).

Figuring out how to rate this film was a genuine struggle for me. You see, I’m quite partial to the story of Esther. The story, itself, is one filled with beauty, bravery, and intrigue. However, this storyline was not written by the writers of the movie. It was written in the Bible, by God. Therefore, my rating is not based on the story, but on how the filmmakers depict the story. By this method; acting, set design, wardrobe, and the rest of the production take a front-row seat.

The acting in the film was a real mixed bag. Some people were fantastic and others were…not. Jen Lilley gave a disappointing performance. I didn’t feel that she was really connected to the character. She did, however, make a very beautiful Esther. The actor who really stole the show was Thaao Penghlis, who played Haman. He, along with Robert Miano, depicted their characters realistically and their scenes were really fun to watch. If I were to see the film again, it would be solely for their performances.

As the film progressed, the acting seemed to improve for everyone. However, there was one performance that couldn’t be saved. Jennifer Lyons gave a rendition of Queen Vashti that literally made my jaw drop. Not in a good way. She decided to give her character, who is a Persian queen, a bad British accent. Call me crazy, but I’m willing to bet that the real Queen Vashti didn’t have a British accent. I could continue with my critique of her performance, but I think that that acting choice really says it all.

The sound department, lighting, editing, and directing were mediocre. There wasn’t anything terrible about any of them, but nothing outstanding. The camera work was static and, in the end, it was the little things that took me out of the story. For instance, when they had the large banquet, I noticed that nobody was eating because all the food was plastic. When the server went to pour wine into a glass, there was no liquid that came out. Getting some real food for the actors to eat and filling the pitcher with colored water are small details that would have made the movie so much better. Even a production with a small budget can accomplish these things.

Lastly, the wardrobe was quite good. I loved the attention to detail with the jewelry for the men. The women had some lovely outfits as well. The only downfall, which was not entirely the wardrobe department’s fault, were the cheap wigs that some of the actors were wearing. They clearly didn’t have the budget for expensive wigs, so they substituted with the type you would get at Party City. Although I understand budget issues, what I don’t understand is why they wouldn’t just cast people that don’t need a wig and naturally look the part. This whole movie was filmed in Los Angeles and, trust me, you can find good actors that look the part out here. It’s not hard.

Basically, is this the worst movie I’ve ever seen? No. Would I watch it again? Highly doubtful. It’s the type of movie that had some good moments, but that ultimately frustrated me because I know it could have been greatly improved with better directing.

WHAT AGE GROUP IS THIS FOR?

The Book of Esther is suitable for almost any age group. There isn’t any cussing or inappropriate behavior. The only questionable topic is that of killing people. The killing of the Jews and the hanging of Haman are verbally mentioned, though not shown.  If that is a conversation you don’t want to have with your young child, than you may want to pick a different film.

LOOKING TO SHOW IT AT CHURCH?

This is an easy movie to show at church because it’s simply a visual representation of a Biblical story. However, like most of the films I review, I would only use clips. I didn’t expect that to be the case, but the overall production quality was so poor in this film that it’s unimpressive in its entirety. The best clips to use would be the ones involving Haman and Mordecai. Their scenes had some real life to them. 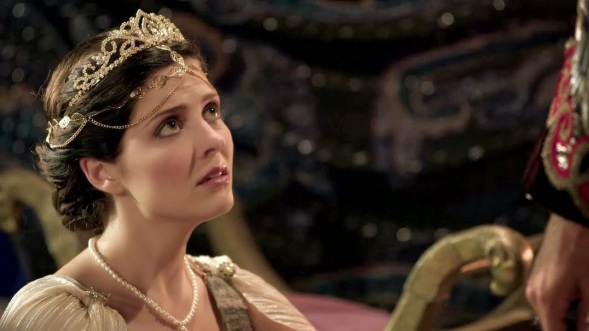